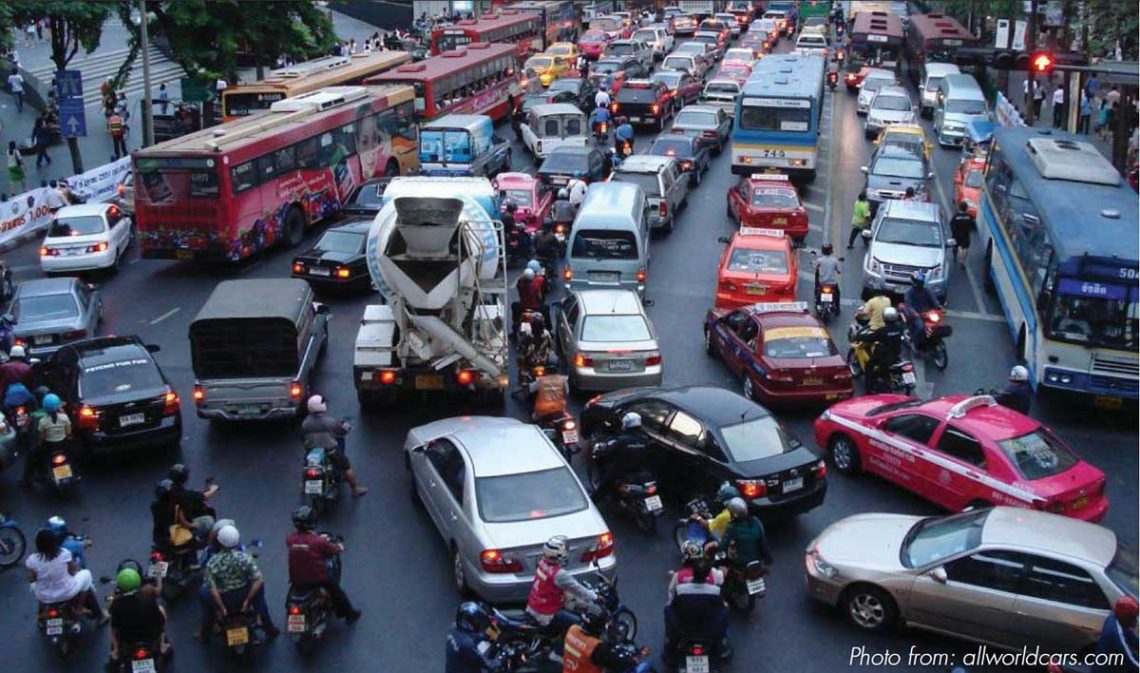 – Karma and the art of driving in Thailand

I was born in a car –almost, and during many years of my childhood my father was the proud owner of a black Opel Rekord 1955, US edition. The grill of that model was chromed and resembled shark teeth, extravagant. One comfortable sofa seat in the front and one in the back, no safety belts, no strange warning lamps. In that car the three of us toured Denmark, my mother criticizing the driving, then suddenly exclaiming: “Hermann, have you seen that beautiful church, look left, no, more to the left”. But my father kept his eyes on the road and the car in front of us. Those tours are the background for my addiction, I suppose; feel bad travelling without a wheel between my hands, freedom!

To drive between a rock and a hard place

My first car here was a new marine blue Mazda 2-doors pickup 2001, we were very proud of that car and toured the national parks of Northern Thailand with the kids. Since then: always a car – no major accidents, only 23 minor scratches, all gathered in Bangkok, and many of them caused by those damned motorcyclists who come much too close when overtaking to the left or to the right in that snail pace race of Asoke. There is no intention here to give you 117 advices regarding safe driving in this country. Nevertheless rule number 1 is: Keep your eyes on the road in front and behind you, always! Forget that holy and very interesting Wat to the left; no matter if your wife invites you to have a closer look. Little by little you will develop the useful technique of being able to look straight back and straight forwards at the same time. Never ever, driving in 31 countries, including Egypt and Sudan, have I experienced such unpredictability as here, so all skills learned come in handy. With experience you also learn about all the birds of ill omens: the elderly Toyota Solunas; the wave haired ladies driving alone in their Benz; the kamikaze pilots; the Toyota Commuter minivans on tour with farang; the 1 tones Nissan pickups loaded with 3 tones of durian; the murderous U-turns; the curves -the road construction engineers must have had our immediate departure on their mind when they designed their sharp, very sharp, curves-, just look at the damaged concrete crash barriers, many cars ended life here. These examples just to mention a few, but you learn. And I can assure you, I met them all on my long journey to Trang, and they met me, the ultra defensive and patient driver in a quite powerful car –if need be; the brakes are very well maintained and the lights and the horn working!

The ‘High So’ lady and the kamikazes

For a long journey it is of course a good idea to start early, to start driving with the light. So, off from Ladprao 5.30 am I was almost taken with my pants down by that alone lady in her Benz, what was she doing here, near Samut Sakorn, 6.10? Didn’t expect to see her angel face in these parts. Driving in the fast right lane the Benz in front of me came closer much too fast. The ABS worked well and I slowly overtook her to the left. The middle aged wave lady was driving no more than 45 km/h (as her kind always do, -in the so-called fast 3rd lane) talking in her mobile phone, eating dim sum and looking in a little mirror placed on the dashboard. The road belonged to her; she was in reality by her vanity table back home. I managed to smile to her in wonder. She and her friends are well known drivers; they are to be seen in many places around Bangkok, but normally after 3 pm. I suppose we could also call our dear lady a kamikaze driver of sorts, although normally we use this definition for another type of lunatics, namely those, who, like dogs, like much to sniff at the other dogs back part. You drive in a line, mowing reasonable fast and you try to keep braking distance to the car in front of you. Behind you a BMW comes very close, sniffing at your rear bumper, he tries every way to overtake to the left, not possible, and then he works hard to ‘persuade’ you to change lane, although there is only a short distance to the cars in front of you. Really: change lane and let him get the advantage of one cars distance. Only the ruder driver instead touches his brakes very lightly; it is said that such a maneuver will make the BMW keep his distance, we suppose so.

More and more U-turns are now constructed on elevated piles, taking you back to the direction from where you came. The constructions of these started from the outskirts of the city and are now reaching into the nearer provinces; meanwhile, in the countryside you still find the traditional U-turns, where you often play Russian roulette with your life, but there are precautions to take. On highway 35, running East/West from Rama IX Bridge till you meet highway 4, taking you South towards Phuket and Trang, there are many and many heavy loaded trucks, always wanting to drive East instead of West or vice versa. Here you mostly have 3 lanes in either direction, as you have so many places in Thailand. As soon as you spot the sign advertising the U-Turn ahead, take the middle lane, from that position you have the best possibilities to evade the 20 tons vehicle now performing his hazardous U-turn. Bypassing Cha Am and Hua Hin reaching Prachuap Khiri Kan on your way South, it’s time for a little mental exercise, many deep breaths please. You must reduce the amount of adrenalin in your body and thereby be able to accept that cruising speed must now also be reduced, we are in the countryside, and the roads in the countryside belongs to the locals, dual carriageways or not! You have monks crossing the road, deep in their own thoughts, daredevils on motorcycles, dogs, chickens and an elderly gentleman riding his bicycle in the very wrong lane, swinging a bit in an out. You also have Uturns but more peaceful and well advertised: ‘U-Turn 1 km. Keep Right’. Here I met another classic Thai traffic situation. The old brownish battered Nissan pick-up driving slowly in the left lane, suddenly realizes that this coming U-turn is his U-turn, he therefore, without further notice and without looking nowhere turn the wheel almost 45 degrees, right in front of you and reach the right lane. But I knew it would come, could feel it. Dear reader, take notice. You will reach Chumpon, which is half the way (approximately 460 kilometers) to Trang or Phuket and it is time to stop for the night. Very many Thais do that and that’s why this small town has so many hotels. Driving must be pleasant and if you drive too many kilometers in the heat, no matter the air con, you will get exhausted and make mistakes. You are here for pleasure, remember?

After a night’s sleep

During night the first little damage to the first Mazda came back in a déjà vu. Turned right at the mighty Ladprao-Ratchada intersection but took the wrong lane and bumped lightly into a taxi. We drove to the nearest place where we were no hindrance to the traffic stood out and greeted each other. I sat down on a curbstone, extremely frustrated, had just started my driving career in this crazy city and now this. Then the taxi driver, bless him, sat down very close to me and comforted me much although I had damaged his car and although we didn’t spoke each other’s language. He could say: ‘Not so bad, not so bad’. Then I paid for new paint for the bumper and we said goodbye, him sending me a ‘cheer up’ smile. The next morning the journey continued, nice and peaceful. The only annoyance was the Toyota Commuters with loads of farang. You always meet them at the PTT gas stations, eating ice cream and buying souvenirs, but also at many places in between. It seems that the drivers take advantage and always drive in the, not so bumpy, right lane; and when they want to have a closer look at the magnificent Wat he slows further down. I reached Trang in good shape and spirits high so don’t let me scare you away, although it is wise to remember that we are in Thailand, not somewhere between Hannover and Kassel.